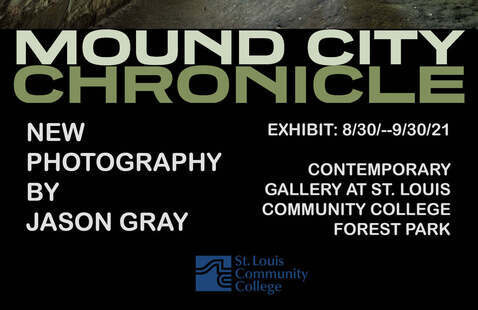 Artist Statement: Mound City Chronicle is more than a series of images of the city of St. Louis. It is also a testament to the path traced by photographer Jason Gray over the last decade. The photographs tell the story of a journey that includes lost-and-found subterranean lakes and caves, places removed from public view (due to security, secrecy or both), neighborhoods with buildings crumbling in ruin or of stately grace, and the people encountered, vibrant and varied. The portraits have a relationship to the environmental images, of something similar to actor headshots juxtaposed against empty film or stage sets—awaiting the viewer to imagine the interplay. It is a body of documentation perpetuated by the photographer’s own decision-making of where to point and when to click; a journey with no clear destination and many side roads. Nonetheless, the project is firmly entrenched in illustrating St. Louis at this particular moment, the photographer’s moment. This is important. For just as the aboriginal mounds of “Mound City” are all but gone, so will be many of the places and people photographed. Like a dream, only their impressions will remain.