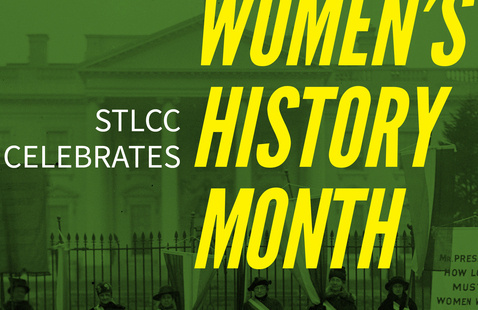 The play Failure is Impossible was first performed on August 26, 1995, as part of the commemoration of the 75th anniversary of the 19th Amendment at the National Archives. To dramatize the debate for woman’s suffrage, playwright Rosemary Knower was commissioned to write this narrative script, drawing on the Congressional Record, petitions to Congress, personal letters within the legislative records of the Government, and other archival sources such as newspaper editorials and articles, diaries and memoirs.

As this year’s keynote event, the Women’s History Month Committee of St. Louis Community College at Florissant Valley will present a staged reading of the script, accompanied by motion graphics courtesy of students in the Animation / Illustration A.A.S. program.

Interpreted for the deaf and hard of hearing. There will be a reception in the lobby immediately following the performance.

Failure is Impossible © 1995 by Rosemary H. Knower, used with permission for educational purposes.

The League of Women Voters will be on-site for voter registration before and after this event.